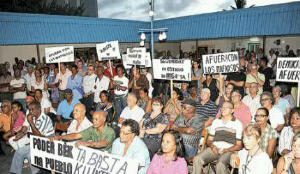 The upsurge of a culture of fear seems to be a myth considering yesterdays successful pressure groups ‘Frente Sivil’ political rally to overthrow the MFK, PS, MAN government at the central union SSK building attended by a self estimated 2000 plus sympathizers. The previous rally held in december 2011 at Alameda was over the 1000 supporters indicating our young democracy is brittle but growing vibrant.

The novice bourgeois alliance pressure group ‘Frente Sivil’ speakers mimicked the same offensive insulting rhetoric they accused the seated government of for 18 months. That’s why critical observers gave them the side eye yesterday as the naming and shaming stand ups got applauded grandiose by the crowd. The reigning smack gospel eclipsed their democratic stratagem to weigh in more people power to the political decision making process.

Yesterday instead of bourgeois brouhaha supposed to be the perfect platform to take off the political fanatic blindfold and start discussing solutions to eradicate the Curacao crabs in a barrel politrix for once and infinite. People ran their mouths but were too shook to mention how Venezuela’s revocative referendum is a legit model to topple a ‘mafia’ government? A new modernized 21st century democratic participatory constitution. A new people empowered electoral system. A new media policy engaging critical citizens preventing them to entrap themselves in these old putrid patterns.

As for the so much talked about culture of fear. Pueblo Soberano the so-called socialist radical revolutionaries do be scared to actually flex some of those Latin American/Caribbean revolutionary hustles to force change for the sufferers. They might be stuck in that urban Willy Lynch myth maze. Now who going to shake down Wiels to return back to the noble social justice emancipating essence?

Keep in mind though that the marginalized, the strugglers out here their hourglass is running out of sand soon. Famed Tambu singer Pincho done told you: “Basta papia pone kabesnan huntu, Ban goberna Korsou, ken a hasi ken a laga hasi no ta nos asuntu” (Enough talking, let’s put heads together, govern Curacao, who did this who didn’t do that ain’t our business).

[~] Why #Curaçao’ans act like they don’t have complexes during a political rally? So Blackface Zwarte Piet is not a racist colonial drone and completely ok to them?

[~] What’s the deal with bourgeois folks thinking their Dutch god complexed mind makes Curacao so much more superior than the rest of the Caribbean islands?

[~] Lent is bringing out political fuckery instead of spiritual tranquility?

[~] Will Frente Sivil question TeleCuracao or remain silent on their televised dictatorship to get political news coverage?

[~] @RebelCapitalist is correct: “Our political and economic systems are reflexive of another both are corrupt and don’t work for most people.”?

5 thoughts on “Frente Sivil: A pressure group swinging a coup d’etat’ saving us from political ‘gangsters’?”