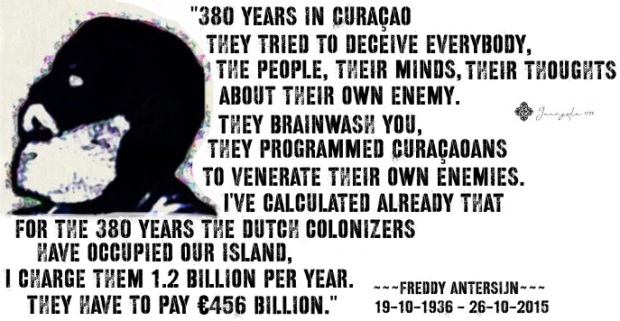 “380 years in Curaçao they tried to deceive everybody, the people, their minds, their thoughts about their own enemy. They brainwash you, they programmed Curaçaoans to venerate their own enemies. I’ve calculated already that for the 380 years the dutch colonizers have occupied our island, I charge them 1.2 billion per year. They have to pay €456 billion.” —Freddy Antersijn doing the Black financial literacy rebellion math on what reparations calculations owed to Black people in Curaçao for dutch enslavement and colonization could look like. In 2012 this reparatory equity demand was personally made known at the office of the representative of the dutch government with a cordial request to inform queen Beatrix, the senate, the parliament and the dutch public in general to get them reparations coins ready.