“You have to deeply analyze the history and colonial reality. The one of dutch enslavement and domination of a Black race in order to liberate your people.” _ Helmin Wiels

The gospel of Wiels reminds Curaçao every time that the creole white and dutch white ruling elite systematically degrades Black political, economic, financial, social and cultural leadership. They do it slick in a camouflaged manner that destabilizes a structural power build up of Black futures on the island or straight up in your face under the guise of ‘dutch bluntness’. This time around it wasn’t from an elite corner but more so out of the serpentine depths of the dutch white hooligan economic class.

This week the co-owner of the Miles Jazz cafe Hans Andriessen enraged and financially frustrated by Covid regulations hurting his business in the dutch white gentrification district Pietermaai called Curaçao a monkey island.  A disgraceful act for a venue embraced by Black musicians on the island and named after Miles Davis a Jazz legend, who he himself endured heaps of violent US racism.

Its a sad but sobering racial reality check to see how dutch white entrepreneurs have the boldness and feel that comfortable to spew raw racist vernacular on facebook to express their natural hidden racial hatred and ill perceived white might against a people that put food in their mouths and money in their pockets that they could never make back in the netherlands.

Online media research in Curaçao reveals that discussions of Black souls by the dutch public is a pestering epidemic. A daily doses of dutch racism can be found at news site knipsel krant curacao, the prime example of digital Black character assassination. A space where the lives of Caribbean Blackness is dehumanized with full approval of the dutch community. The normalization of calling Curaçaoans of African descent on their island “apes and jungle monkeys” has been going on for years on the internet if not for decades, centuries when the dutch are within their own private circles.

However the until now digitized backlash this has caused doesn’t have its origins in this week’s specific hate speech. The root problem is that this racial denigration is an expression of a dutch white hyper plunder ideology. It’s anchored in the mind of the average dutch on the island and in the Netherlands. Black people are still enslavable to them, still seen as their property and Curaçao is their treasure island to become rich and wealthy on the backs of the people. And thankfully there’s a growing Black minority who understands the importance for a power struggle to take back the economic and financial ownership out of the hands of white thievery to design their own destiny.

The outrage forced the other co-owner(s) of Miles Jazz cafe after several days of stalling and scheming to issue a statement that they suspended their partner. The fiery pressure of Black breath made them close their facebook account and instagram. The silence and white privileged defense of the dutch community and the Chamber of Commerce and VBC (Curaçao business association) is telling and not surprising because by nature they have to stand by their racist hooligan to prevent a domino effect and maintain an injust white wealth dominance in Curaçao. Calls for boycotting  or shutting down the cafe have been send out. The ancestral normal would most obviously be to enforce a Black owned entrepreneurial takeover and bring back life in Pietermaai the way it was before it got gentrified by dutch vulture project developers. Only 8 days are left to commemorate the May 30th 1969 racial labor revolt and this dutch Corona induced racism has all the atmospheric opportunities to spark a creative liberating flame to burn down this colonial calamity that has been a genocidal catastrophe for ages. Backing up our words and sentiments is essential and transforming them into a real life moves is the ancestral normal of taking steps on the journey for Black freedom.

Who owned it first? The jews. I was the only Curacaoan with this color they call ‘sad’ who dared to buy seven houses. Monuments owned by protestants and jews.
I rebuild them with my own damn money.”

“380 years in Curaçao they tried to deceive everybody, the people, their minds, their thoughts about their own enemy. They brainwash you, they programmed Curaçaoans to venerate their own enemies. I’ve calculated already that for the 380 years the dutch colonizers have occupied our island, I charge them 1.2 billion per year. They have to pay €456 billion.” —Freddy Antersijn doing the Black financial literacy rebellion math on what reparations calculations owed to Black people in Curaçao for dutch enslavement and colonization could look like. In 2012 this reparatory equity demand was personally made known at the office of the representative of the dutch government with a cordial request to inform queen Beatrix, the senate, the parliament and the dutch public in general to get them reparations coins ready.

Joyful hearts, glowing faces,pridefulness eyes
the queen would soon see them move their hips
and feets in folkloric regalia. Reppin’ the Caribbean.
It was their moment to shine. A desire coming into
existence.

The funeral costs never paid by queen bitch beatriki
No financial penitence for his life lost and loved ones
The tickets for his wife and kids for his homecoming in Curacao
were never paid by the royal dutch billionaires.
The wounded that kept their breath never saw compensation
for the trauma experienced 10 years ago.

The hurtfulness of coloniality: They still wear orange paying
homage to the new royal highness. After the reality checks of
racial and class foolery. After the inescapable disdain for human life
After the after-lives of colonized idolatry avenges itself and composes
a melody of death. 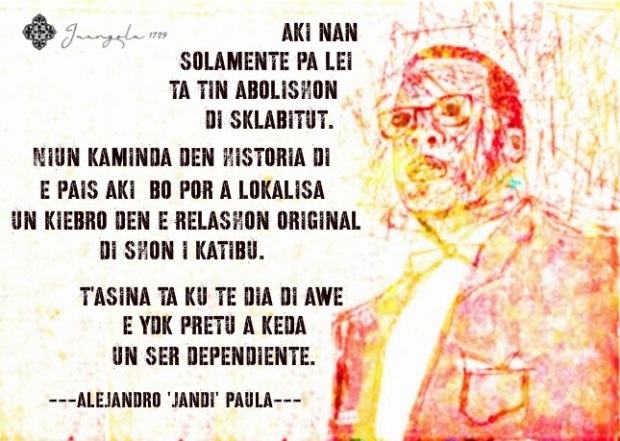 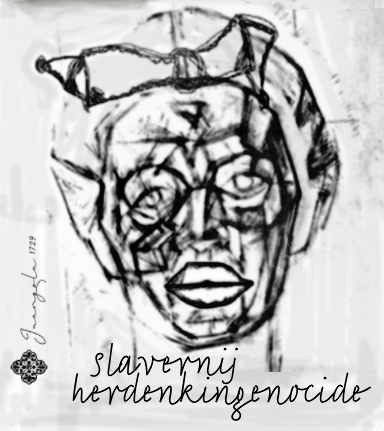 [One of] The biggest dutch crime against Black humanity is the fact that in 2017 they still treat their colonies as if their slavery project never intergenerationally affected these islands on all sorts of levels in their societies to this day. That savage consciousness is needed to protect their government monies from being transferred to develop the islands to the european equitable standards of living which they agreed upon ever since they started the decolonization process in the 1950s via United Nations mechanisms. The dutch systemic violation of the constitution, kingdom charter, international law and treaties remain with impunity so far.

Right after the smoke and ashes cleared from the Black labor revolt in 1969 Amador Nita one of the main union leaders of Trint’i mei became minister of social affairs. During his first visit in the Netherlands he spoke to queen Juliana and demanded from her and the government $500 million, a yearly reparations fund as financial exodus from the dutch demolishment of enslavement and colonialism.

While boarding a flight in Amsterdam a bomb threat delayed his return to Curacao. A few weeks later after coming back from his revolutionary quest he allegedly dies from an acute nerve disease.